Use the CHIME/FRB Beam Model

Before getting started with the CHIME/FRB beam model, it is useful to understand the coordinate convention used:

These coordinates were chosen based on how L0 forms beams:

Beams IDs are numbered so that the first digit is the S-N running column (i.e 0-3) and the next three digits are the E-W running column.

Diagram of beam labelling. Z denotes the location of zenith in the grid and P denotes the North Celestial Pole. Credit: Mark Halpern

The transformation between equatorial coordinates and beam coordinates is shown most clearly when mapping arcs of constant y/Dec map onto equatorial/beam model coordinates, respectively. 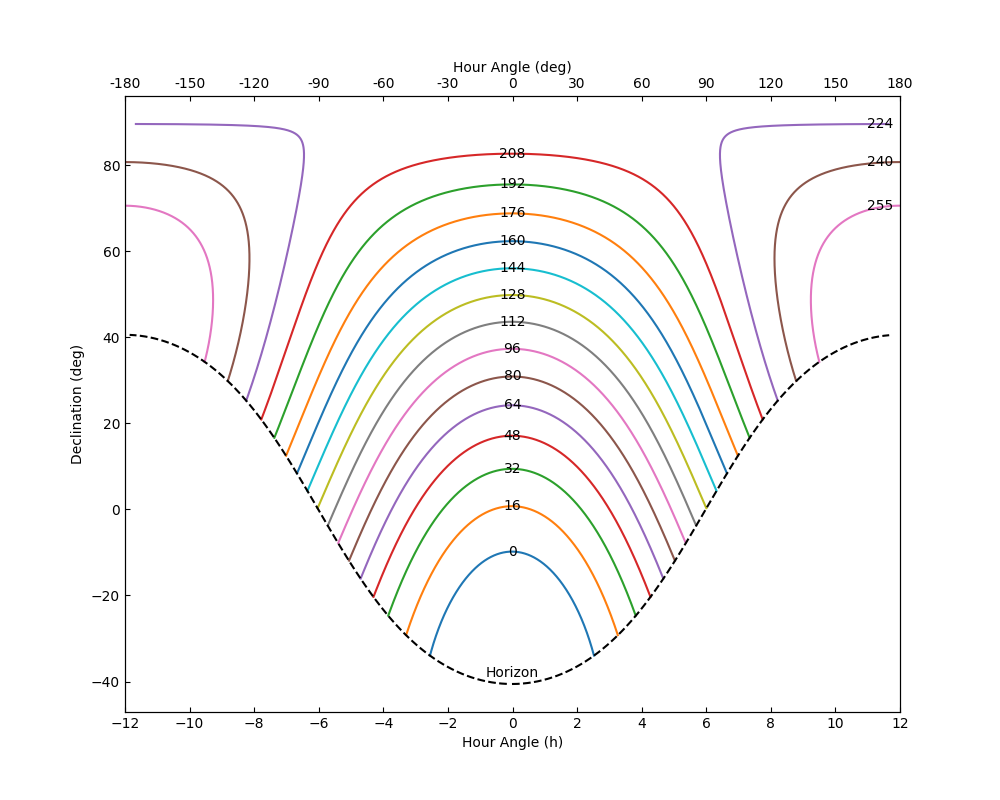 Arcs of constant y in equatorial coordinates. Each plotted arc corresponds to the center of a beam row that is labelled with its NS index. The horizon is represented by a dashed line. Credit: Paul Scholz

Some things to note about the above plot: 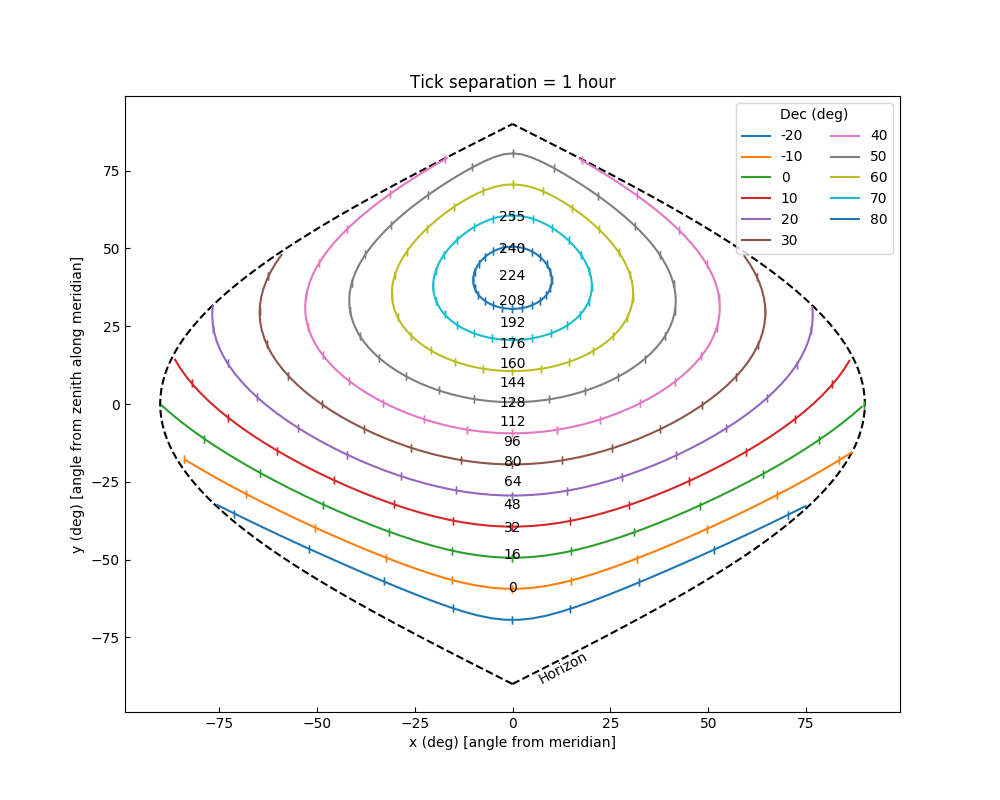 Arcs of constant declination in beam grid coordinates. Each arc corresponds to a declination shown in the legend. Tick marks on the arcs represent the distance a source travels in an hour. The location of beam rows are shown on the meridian as their NS indexes. The horizon is represented by a dashed line. Credit: Paul Scholz

Some things to note about the above plot:

In the following example, we'll calculate sensitivities for a single beam, at one coordinate position, and for all 16384 CHIME/FRB frequencies. Note that some frequencies in the beam model cannot be appropriately modeled due to interference. This normally isn't an issue, since the missing frequencies are also masked in detected FRBs. However, in cases where you wish to interpolate through these otherwise missing "bad frequencies", the interpolate_bad_freq option is available. 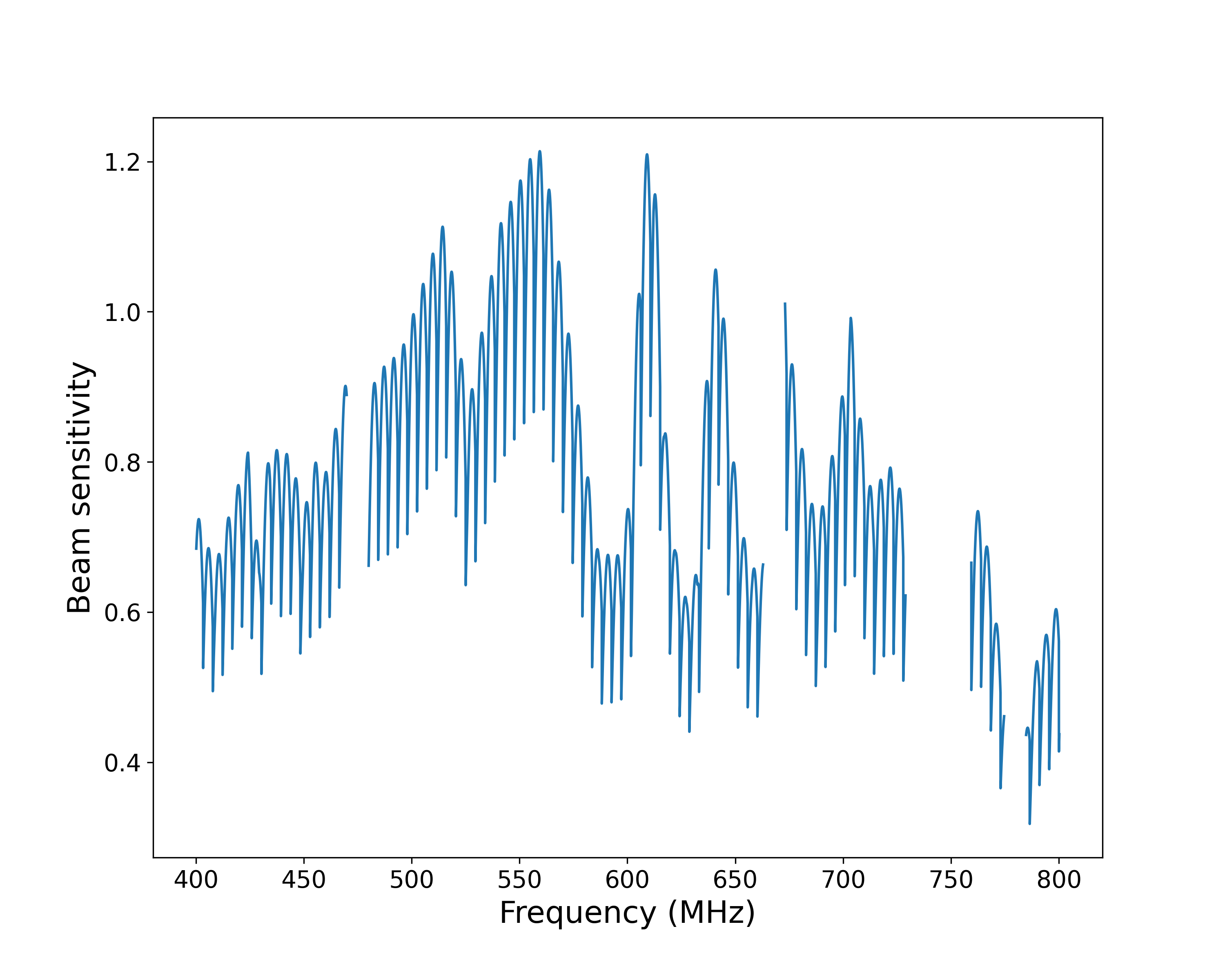 A plot of the sensitivities generated in the first example. Credit: Marcus Merryfield

The output sensitivities from the beam model range from 0 to slightly above 1. The value can be interpreted as the relative sensitivity compared to the center of the CHIME primary beam.